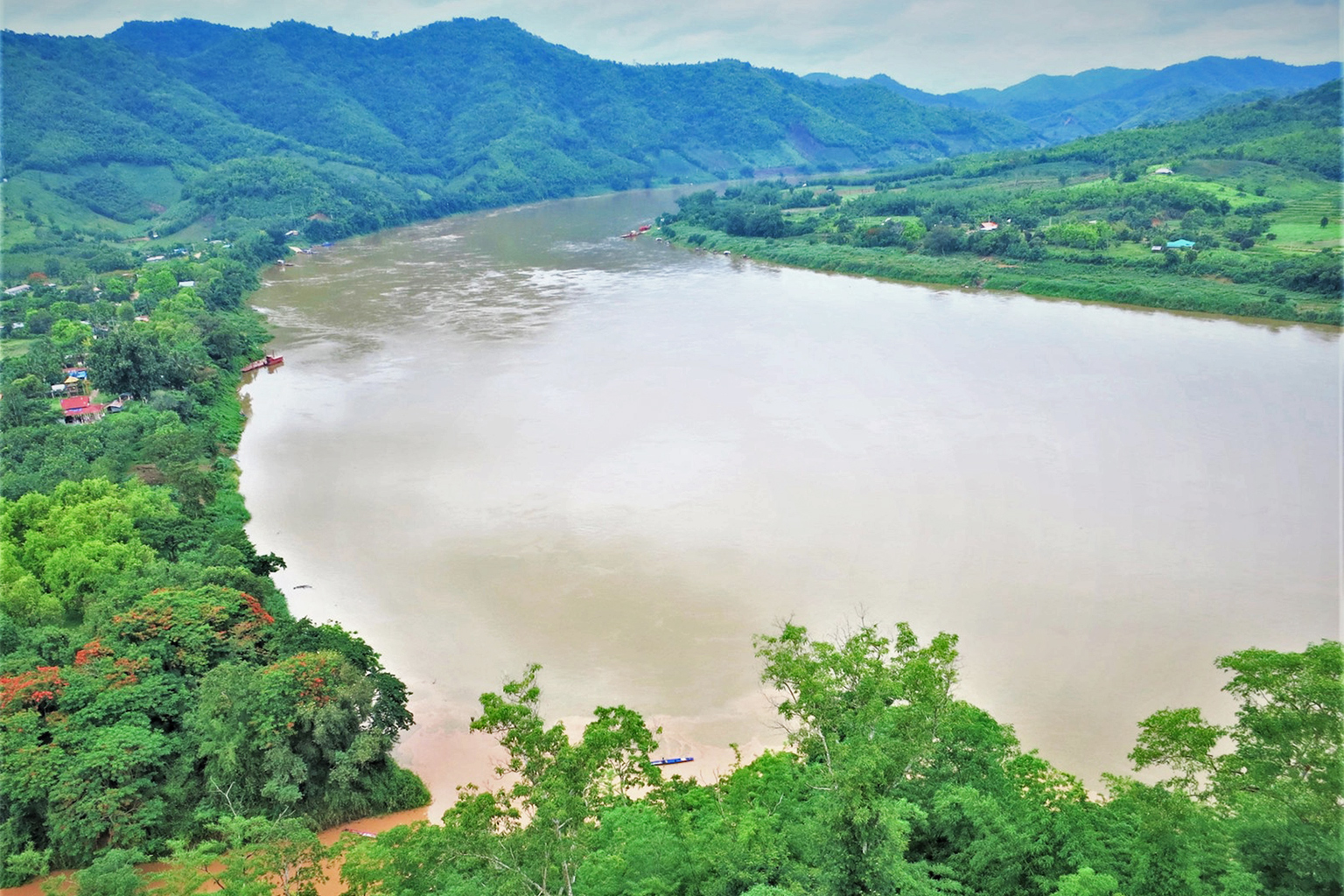 CHIANG KHAN, Thailand — In the rustic old town of Chiang Khan on the Mekong River, a tourist haven in northeastern Thailand’s Isaan region, local fishing communities now live in fear of a proposed dam that threatens to devastate their livelihoods.

The $2 billion, 684-megawatt dam would sit just 2 kilometers (1.25 miles) upstream of the Thai border, in Laos, and has triggered outrage over its potential transboundary impacts.

“Sanakham dam will be a disaster for ecology and fish, it will also cause worse flooding followed by drought,” Thanusilp Inda, the head of Ban Klang village in Chiang Khan, tells Mongabay.

The Lao government already has two dams operating on the Mekong and seven more mainstream dams scheduled for construction. Further upstream in China, another 11 dams are already in operation on the river. Fishers in Thailand say they’ve already seen their catches decimated with each new dam built upstream of the planned Sanakham dam, in particular the Xayaburi dam that went online in Laos in 2019. Image by Shannon1 via Wikimedia Commons (CC BY-SA 2.0).

Fishers downstream in Thailand’s Loei and Nong Khai provinces, both in the Isaan region, have already been badly hit by this relentless succession of dams.

Rasamy, the wife of a Nong Khai fisherman who gave only one name, says the proliferation of dams has made life a misery. “Chinese dams made fishing hard, but after they built the Xayaburi dam [in Laos], now it is much harder,” she says. “In the past week we got hardly got any fish at all.”

The 1,285-MW Xayaburi dam, completed in 2019, was funded by the four biggest Thai banks, and built by Thai corporation CH. Karnchang.

Prayoon Saen-ae, the leader of the Chiang Khan Fishermen’s Group, points to the damage inflicted by the Xayaburi dam, 314 km (195 mi) upstream.  “After the Xayaburi opened its gates, we had huge impacts,” he says. “[T]he erratic ups and downs of the water, it created confusion for the fish. Before the dam started, one fisherman could get 10 kilos [22 pounds] of fish a day, but now we are lucky to get 4-5 kilos [9-11 lbs] a week and some weeks nothing.”

Now, Prayoon describes the specter of another dam on the horizon: “The Sanakham is so close it is under my nose.”

In Nong Khai province, Chaiwat Parakun, deputy village chief  and former fisherman from Ban Muang, tells a similar tale of woe: “We have so few fish to catch that only 20 out of 100 fishermen are still working. Before the Xayaburi dam, one fisherman could net an average of 10 kilos a day, now if he is lucky 5 kilos a week. But some weeks no fish at all.” He adds that 60-70% of fish species “are no more.” The sun sets over the Mekong in Nong Khai, where the Mekong River forms the border between Laos and Thailand. Image by Tom Fawthrop.

Chainarong Settachua, an environmental expert at Mahasarakham University in Maha Sarakham province, also in the Isaan region, points to the wider picture across Thailand’s northeast.  “If we include the tributaries of the Mekong, the losses could be much more than 70%. Many [people] get fish from the Mekong tributaries, also depleted from the loss of the normal rainy season flood pulse.”

Nourished by these floods, the Mekong’s floodplains are a globally significant source of biodiversity. The Songkhram River, in particular, has provided such rich spawning grounds that the tributary is locally known as “the Mekong’s womb.” But that’s changing. Chainarong said he’s observed wide-ranging impacts from the decline of fisheries in northeast Thailand. “In the past, fish were plentiful and it was the cheapest protein,” he says. “Now, people in Loei province and other provinces of [the] northeast are suffering fish scarcity, lack of food security and a poorer diet.”

An analysis by the Mekong River Commission (MRC), an intergovernmental agency that works with Cambodia, Laos, Thailand and Vietnam, accepts there has been a major decrease in fish biodiversity at sites in Laos’s Xayaburi province and Thailand’s Loei. But its 15 monitoring stations based in Laos found only a 20% decline in species richness. This isn’t consistent with the experience of many Thai fishers, who report suffering losses as high as 80% compared to before 2019, when the Xayaburi dam went into operation.

The Sanakham dam’s main investor, China Datang Overseas Investment Co., is a subsidiary of the Chinese state-owned China Datang Corporation, also the prime investor in the Pak Beng and Pak Lay mainstream Mekong dams. It refers to all its hydropower projects on the Mekong as part of China’s Belt and Road Initiative, the country’s global infrastructure development strategy.

More recently, the fast-rising Thai company Gulf Energy has come on board as its partner, seeking a 30-35% equity interest stake in Datang’s Mekong  dam projects. Gulf Energy declined to comment specifically about the Sanakham project, but has previously told media it “recognizes the importance of climate change and decarbonization” and is emphasizing renewable energy investments. The Sanakham is the sixth mainstream dam submitted to the MRC for a  “prior consultation” process, which allows the four member states and other stakeholders to consider how best to mitigate impacts on the environment, fisheries and communities. It’s a purely advisory process and the MRC has no regulatory powers.

The MRC consultation began in 2020, but has been delayed far beyond its normal six-month period. Surasi Kittimonton, secretary-general of the Thai government’s Office of National Water Resources (ONWR), told Thai media that “we have insisted on our position that we need to have sufficient information first.” He said the delay is because “what we are doing is protecting the country’s interests.”

Datang and its Thai partner have already secured a pledge from Thai energy utility EGAT and the Thai government to buy 90% of the electricity from the Pak Beng and Pak Lay dams. A decision on whether to also buy from Sanakham will be up to the Ministry of Energy and Deputy Prime Minister General Prawit Wongsuwon.

Despite calls for the Thai government to take a stand and refuse to buy power from the Sanakham project, fishers and civil society activists have expressed doubt that their voices will be heeded by decision-makers. View of the Mekong upriver towards the Sanakham dam site, which lies behind the hill on the right. Image by Tom Fawthrop.

For many years, the Mekong leaders, the MRC and the World Bank have all made the case that fish ladders and sediment flushes can effectively mitigate the environmental damage from dams, and promoted so-called good dams.

In the same vein, Deputy Prime Minister Prawit Wongsuwon, who chairs the Thai committee of the MRC, has called on the ONWR to find ways to mitigate the dam’s impacts rather than block the project.

In spite of experiments with fish mitigation technology, there’s almost no evidence it has worked in tropical rivers. Channarong Wongla, from the Rak Chiang Khan (“Love Chiang Khan”) Conservation Group, calls the Xayaburi dam’s fish passages a bad joke. “We laugh about fish ladders,” says Channarong, who has a degree in dam design. “Xayaburi had them but still we lost most of our fish. We used to have more than 100 different fish species, but since the Xayaburi dam started operations, only 20 species remain here [in Chiang Khan]. It is 100% sure that fish mitigation does not work.”

In reply to questions about the Xayaburi dam’s impacts, the MRC headquarters in the Lao capital, Vientiane, said, “We do not have any data to prove that fish loss or extinction is either directly or indirectly the result of the Xayaburi dam.”

But Channarong says the evidence in northeastern Thailand clearly shows that “Xayaburi fish mitigation is a complete failure.” He adds, “the time has come for the MRC to call for suspension of all major dam projects on the mainstream Mekong.”

So far, only Cambodia has stopped two Mekong dams, by declaring a 10-year moratorium on mainstream dam development in order to protect the ecosystem. But given the energy priorities of the Thai government, it appears unlikely to follow Cambodia’s example.

Banner image: A fisherman and an old rice barge on the Mekong in Chiang Khan, Thailand, courtesy of Saranya Senaves.