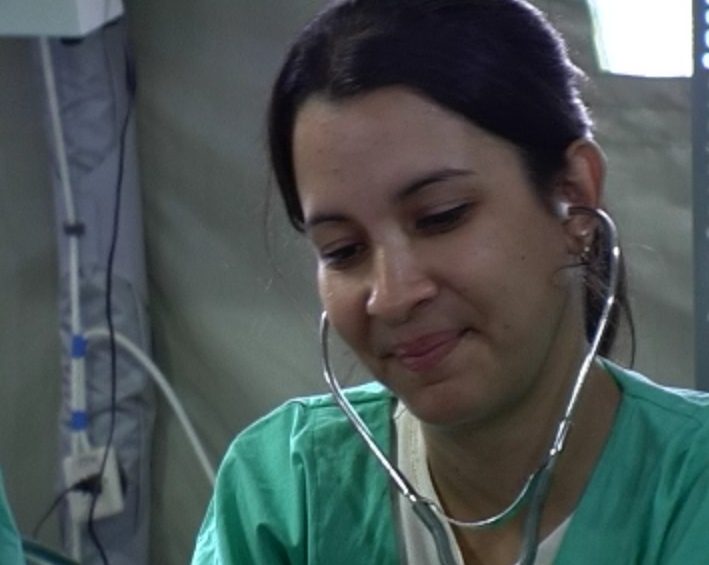 How many people in the world would guess correctly, which country in the world provides the most doctors and medical missions to the developing word?
Well-informed people or a quiz contestant would probably guess it must be France, the US or the UK. In fact none of the above, but a small Caribbean nation that has punched far above its weight in responding to earthquakes and other medical emergencies around the globe. Strange but true it is cash- strapped Cuba.
Tom Fawthrop is a London-born journalist and filmmaker, based primarily in Southeast Asia since 1979. He has contributed to BBC and Al-Jazeera TV and directed the documentary Swimming Against the Tide (released 2007), about the Cuban health system

• It has established new medical schools in Ethiopia, Ghana, Gambia, Equatorial Guinea and Guinea-Bissau.
• Cuba has also set up 14 Latin American eye-care centers as part of its “Operation Miracle,” which operates in 31 countries. It has improved or restored sight for 3.4 million people.
• Since the 1970’s, Cuba’s training program has seen 17,000 medical professionals, including doctors, return to African nations
• Cuban doctors have become the number one country for the deployment of medical teams to combat epidemics worldwide, like Ebola in West Africa and Cholera in Haiti.
• Cuban laboratories are engaged in groundbreaking research.
• Experts worldwide praise their system. Dr. Arachu Castro, the Burke Fellow at Harvard Medical School’s Department of Social Medicine, says “It is internationally known that medical standards are very high in Cuba and medical training is very good.”
.
The new film will also cover how economic changes, US rapprochement and an influx of foreign investment will affect the health system. Many westerners may assume socialism is about to capitulate to the lure of the dollar, and blindly adopt the Chinese model. Millions of Cubans have other ideas about their future
The target is to raise £5000 by the end of November to fund a low cost production
1) producer/director
2) cameraperson
3) local fixer and driver

This modest fund will launch the first stage of research, logistics and initial filming leading to a second trip based on further funding in 2016. All donations will be gratefully appreciated no matter how big or small.
Contributions of £30 /$40 or Euro equivalent, will receive a report with photos from our trip in December 2015, plus free online access to our second film on Cuba: Healing Africa- the Havana Prescription
——————————————————————————–
For more information about Tom Fawthrop‘s work on Cuba a both for print media and video, please go to these links:
Eureka Films on Cuba
Eureka Films directed by Tom Fawthrop on the Cuban health system :Swimming-against-the Tide http://www.phmovement.org/en/node/399
Reviewed here: http://newint.org/columns/media/film/2008/06/01/swimming-against-tide/
For more information and access to DVDs of all Eureka Films contact eurekacuba@gmail.com and visit the website: www.Tomfawthropmedia.com