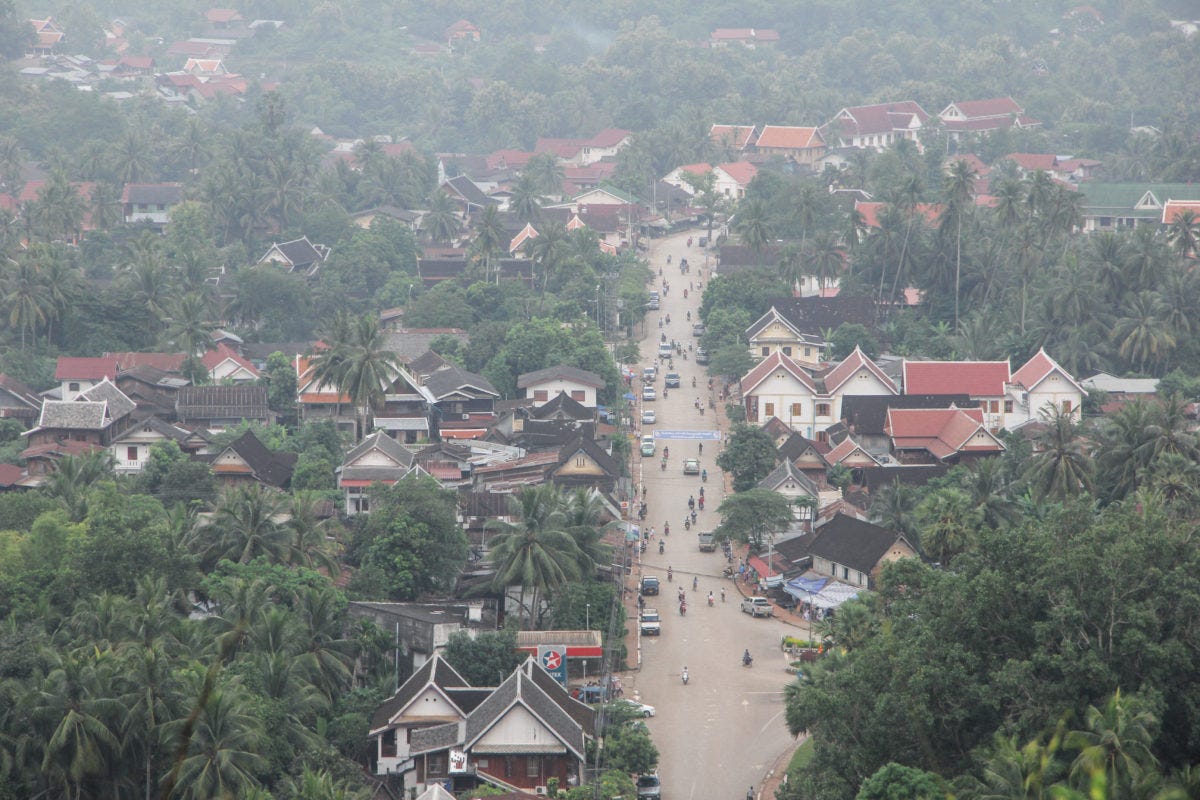 A leading Thai geologist is warning that a huge new dam proposed in an earthquake-prone region of northern Laos poses a high risk of endangering the famed UNESCO-World Heritage city of Luang Prabang.

The 1410-megawatt dam, expected to be Laos’s largest, is being developed by Thai construction giant CH Karnchang Plc on the Mekong River. It sits precariously close to an active earthquake fault line only 8.6 km away. The site is about an hour upriver from the tourist mecca, which has been called a “unique, remarkably well-preserved townscape illustrating a key stage in the blending of European colonial and traditional Laotian cultural traditions.”

The warning is based on field research by earthquake specialist Punya Churasiri, an emeritus associate geology professor at Chulalongkorn University in Bangkok, who in a recent interview said: “This Luang Prabang dam is high risk.” Punya, a seismologist with considerable field research experience in northern Laos, is deeply concerned. “We worry about what could happen and the possibility of damage to the world heritage site.”

There is ample reason for concern. The weight of large dams has often triggered earthquakes in far more stable sites. A 6.1 earthquake hit Xayaburi province in northern Laos last November, a sharp reminder that the scientist’s warnings need to be taken seriously. It even shook high buildings in faraway Hanoi.

Although the Xayaburi Dam, the first completed on the lower Mekong, emerged unscathed, Punya cautioned that “They were quite lucky. That earthquake could have been much worse because there are several active faults near that dam.”

The Xayaburi Dam, also built by CH. Karnchang, was funded by the four biggest Thai banks. In 2011, as Asia Sentinel reported, the project was strongly opposed by riverine communities, NGOs and scientists in Cambodia, Thailand and Vietnam. The dam came into operation last October, only a few weeks before the earthquake. The same company is now working with the Lao government’s Luang Prabang Power company to build a second sister dam upstream with an almost identical design and structure.

In the rush to build dams all over their landlocked nation, the Laotian government has mapped out 72 new large-sized hydropower projects and many smaller ones. Vientiane has defended them as the only way they can lift Asean’s poorest nation out of its current least-developed status, an ambition to become what it has called “the battery of Southeast Asia.”

However, many environmental organizations and other critics say hydropower has overall failed to demonstrate its material benefits, warning that they outweigh the accumulated losses in fisheries, food security and agriculture that negatively impact millions of poor farmers and a total of the 70 million citizens who live in the Mekong basin.

The MRC and the Developer

Critics say building large dams is always risky, even without being located in an earthquake zone. The Laotian government’s record of damming every river only changed after a major dam collapse in Attapeu province in 2018. Many villagers were swept away and 14,440 people suffered major losses with 71 confirmed dead. After that, the World Bank helped the Laotian government belatedly adopt basic safety guidelines.

The inter-governmental Mekong River Commission views dam safety as a major issue, furnishes technical reviews on all mainstream dam projects on the Mekong and recommends compliance with World Bank guidelines. In reviewing the Xayaburi project in a March 2011 technical review. The MRC’s secretariat concluded that the Xayaburi project didn’t at that point comply with World Bank standards, writing in relation to a previous temblor that “The recent earthquake near Xayaburi emphasizes the need for an independent review of the project according to international safety standards,” the technical review said.

Nine years later, according to a 2020 response from the MRC secretariat: “An Independent Dam Safety Review Panel for the Xayaburi dam project and assignment of the task to review the Design Report was not established.”

That means Ch. Karnchang and the Laotian government have failed to comply with this major provision of international dam safety standards. And now the same non-compliance is being repeated in the waters above Luang Prabang.

Instead of an independent panel, according to the MRC response to Asia Sentinel, “The Lao government engaged Pöyry company as “Owners Engineer” to review dam safety matters.”

Pöyry is the Zurich-based energy branch of a Finnish Corporation. It was deeply involved in promoting the Xayaburi dam as a partisan consultant and was rewarded with a second contract to supervise the construction in partnership with Ch. Karnchang.

An owner’s engineer represents the owner of a project during design, development, and construction. In the case of the Xayaburi dam, Pöyry is comfortably in bed with the owners. It may well be asked why the MRC experts did not query such a cozy arrangement, which hardly measures up to the need to comply with international standards of monitoring due diligence.

“The Pöyry Company reaped a lucrative eight-year reward for its deceptive behavior as a consultant. This is an outrage,” said Otto Bruun, a Finland- based Friends of the Earth campaign coordinator.

A spokesman for Poyry Energy in Bangkok denied there was any conflict of interest.

The Luang Prabang dam – a “second Xayaburi dam” – is about to be launched in 2020 with mostly the same cast of companies, the same Thai developer Ch. Karnchang and their partner Poyry Energy.

A six- month regional consultative process with all four member states and other stakeholders is just drawing to a close. The MRC technical review process has again identified numerous risks to the ecosystem, and the need for stringent plans for dam safety.

“The potential to impact a UNESCO World Heritage site further emphasizes the need to adopt the very highest standards of dam safety and emergency warning for this project, according to a key passage of the MRC document.

But serious doubts have already been raised about the standards of the developers and Poyry that have yet to be resolved.

Seismologist Punya Churasiri, who called attention to the danger to Luang Prabang, was originally hired as an earthquake consultant by the Thai company but the developers turned away from funding a seismology investigation proposed by the scientist and opted for a faster track modelling report carried out by the staff of the Asian Institute of Technology.

“A Seismic Hazard Study assessment was elaborated at the Asian Institute of Technology based on seismic hazard analysis concepts,” according to the MRC technical review section of the Luang Prabang dam proposal, “and seismotectonic investigations to locate the Dien Bien Phu fault, which passes close to the Xayaburi site and which is capable of producing large earthquakes”

Punya, formerly head of Chulalungkorn University’s Research Unit for Earthquake and Tectonics Geology of Mainland Southeast Asia.  was not impressed. “Ch Karnchang employs many geological engineers from AIT (Asian Institute of Technology) but they have no expertise on earthquakes, that is just not enough,” he wrote.

Measuring the capacity of dam walls for earthquake resistance was the prime purpose of AIT specialists but seismology is also concerned with a wider range of threats. “a cascade of dams that can trigger reservoir-induced seismicity” also has to be investigated.

With so many safety issues and a flood of environmental objections, why choose such a sensitive high-risk site brimming with potential as the location for the next dam disaster?

“All this process is at best attempting to mitigate entirely unnecessary damage due to the flawed choice of the dam site,” said WWF water security and hydropower consultant Jian-Hua Meng, who sees the underlying assumption of the MRC consultation as flawed. “Many less-ecologically and less-culturally sensitive sites could have been developed faster, and with significantly less risk to food security of the downstream countries. It is an irresponsible gamble. “

Mekong specialist and University of Sydney Emeritus Professor in Human Geography Dr. Philip Hirsch told this reporter that: “In 40 years of visiting dams, I have yet to see a dam on a tropical river where mitigation has worked.”

The MRC is an advisory body with no regulatory powers and all decisions are in the hands of member states. Still, their mandate could encompass setting out benchmarks for unacceptable degree of dam risks and environmental damage and opening up debate on the No Dam option.

Punya’s advice is much clearer. “No dam should go ahead without more detailed study of faultiness, to demonstrate it is safe. If this happened to be a cultural heritage site in Thailand nearby like Luang Prabang, no dam would be allowed to go ahead.”

Tom Fawthrop is the director of Eureka Films, which produces documentaries on the environment, health and grassroots politics in the developing world.