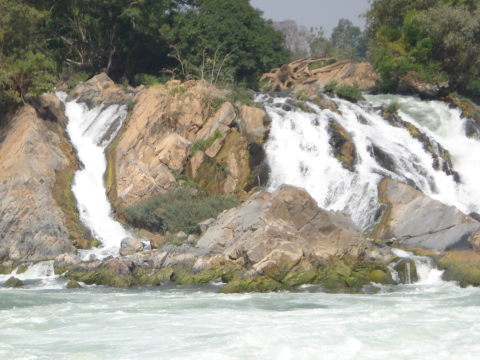 The Mekong must run free!

The Mekong is among Southeast Asia’s greatest rivers, sustaining tens of millions from its abundant fisheries and its floodwaters which both irrigate and fertilise. But as Tom Fawthrop reports, Nature’s bounty, and beauty, are at risk from a series of 11 dams.

Explorers, travellers and traders have long been enchanted by the magical vistas and extraordinary biodiversity of the Mekong flowing through six countries from the mountains of Tibet to the delta in Vietnam.

Approaching the Cambodian border in the Laos’s southern region of Siphandone lie the spectacular Khone Falls – where the river becomes braided into channels, with a glorious panorama of spectacular waterfalls and swirling rapids.

These rapids create endless islets – the famous Four Thousand Islands that give Siphandone its name, set apart by a maze of narrow channels and rapids.

This uniquely beautiful and biodiverse habitat is just upstream of a colony of Irrawaddy dolphins that also draws many visitors – sustaining a growing eco-tourism industry which directly benefits local communities.

The river provides the largest inland fisheries in the world, its 1,000 species of fish providing nutrition and food security for over 60 million people. These include the iconic Giant Catfish, the world’s largest catfish species, which can reach more than 3 metres in length and weigh over 300kg.

A Mekong River Commission (MRC) consultant in a 1994 report described the Khone Falls as “an ecologically unique area, so rare in nature that every effort should be made to preserve all of Khone Falls from any development.”

This eco-tourism paradise has all the credentials to qualify as a World Heritage site – with all the tourism benefits that designation would bring. It is also eligible to become an internationally designated Ramsar wetland.

The total value of fisheries, tourism and other benefits has  been estimated at $2-3 billion per year.

Read Full Article on The Ecologist